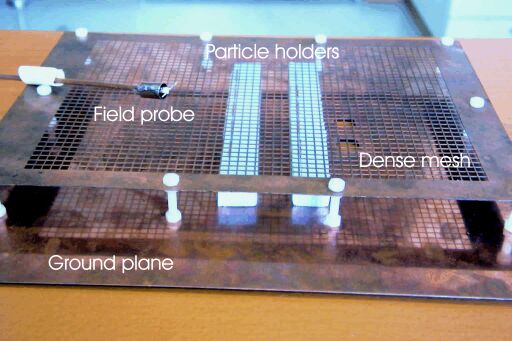 It is known that a slab of backward-wave medium (material with negative permittivity and permeability) can work as a "perfect lens", amplifying the evanescent part of the incident field. This phenomenon suggests many important applications in (nano-)imaging and detection. However, it is very difficult to practically realize such materials.

In this project (funded by the Finnish Academy and TEKES) we studied alternative possibilities to realize such devices.

First, it is important to understand that a perfect lens makes two very different operations. It focuses PROPAGATING waves, as a usual lens, and it enhances (amplifies) EVANESCENT waves. The last operation is very unique for this device. No other passive optical device can amplify evanescent field components: Evanescent fields exponentially decay in space and are lost forever. Amplification of evanescent fields is a very important function, while propagating modes can be focused by a simple lens.

We have shown that a system of two coupled planar sheets possessing surface mode (polariton) resonances can be used for the purpose of evanescent field restoration and, thus, for the sub-wavelength near-field imaging. The sheets are placed in free space so that they are parallel and separated by a certain distance. Due to interaction of the resonating surface modes (polaritons) of the sheets, exponential growth in the amplitude of an evanescent plane wave coming through the system can be achieved.

Evanescent fields are excited by a small dipole source (shown above the device) inside a below-cut-off plane waveguide. These fields are amplified by a system of two small resonant particles positioned on two foam holders (light blue). The field distribution is measured by a small probe scanning over the dense metal mesh.

Furthemore, this principle can be extended to superlenses that not only enhance evanescent fields and restore their distribution in the image plane, but also enlarge the image. This allows us to link a superlens that senses and amplifies evanescent fields with the usual propagating-wave optics, because after enlarging the fields can be coupled to propagating modes of free space. This principle was demonstrated in P. Alitalo, S. Maslovski, S. Tretyakov, Near-field enhancement and imaging in double cylindrical polariton-resonant structures: Enlarging superlens, Phys. Lett. A, vol. 357, no. 4-5, pp. 397-400, 2006.

The measured electric field distibution, as shown in the picture above, reveals amplificiation of evanescent fields and enlarging of the image.

The concept of superlenses based on resonant particles can be extended into visible frequency range if metal nanoparticles are used as resonant inclusions, see P. Alitalo, C. Simovski, A. Viitanen, and S. Tretyakov, Near-field enhancement and subwavelength imaging in the optical region using a pair of two-dimensional arrays of metal nanospheres, Physical Review B, vol. 74, p. 235425, 2006.